I have a problem with the word "abuse." 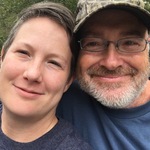 My husband uses the word “abuse” to describe the cause of my struggle the past few years. He has been the most up-close-and-personal witness to my recent self-exploration. Others who grew up in the same Closed, High Demand Group and later left also use that word. I understand why they would. However, I still find it monumentally hard to apply that term to my childhood experience.

My parents cared about being parents. They worked hard, physically and mentally, to raise their children. I have a very difficult time assigning “abuse” to any aspect of my childhood, because I still believe so much of my existence was deeply good and privileged simply because I was born to those two people. That doesn't sound like abuse to me.

I think my parents believed wholeheartedly in the group's goodness, at least as far as exposing their kids to it went. I think many people did. I figured out at a fairly young age that they knew about issues and scandals and differences of doctrine within the group. I was aware they didn't blindly follow the direction of those in authority or other members without weighing their personal decisions carefully. But I think they were unaware of the extra, unnecessary pressures inherent in being a kid member. Ignorance isn't abuse, is it?

I absolutely am of the opinion that the group's structure creates an environment where abuses of authority can occur unchecked, leading to financial, sexual, mental, and emotional abuses. I also know for fact that the group is not in line with GOD's commandments in its practices and teachings. Is that abuse?

I sometimes use the word “abuse” as I tell my story. My parents were FAR from abusive. The group they belonged to, and in which I was immersed by default, taught lies which absolutely affected the course of my brain's childhood development.

I shrug tiredly. I don't know. There were aspects which made life so much harder than it's meant to be. I testify that absolutely I came out of childhood with deep emotional pain - I hurt on a very deep level. At the same time, there is a possibility that some of those warped thought patterns helped me get my present life, and are helping me sustain it. Just because they aren't the “normal” thought patterns that would have helped me get here, is that abuse?

This is all part of the mental Tangle I work to unravel.